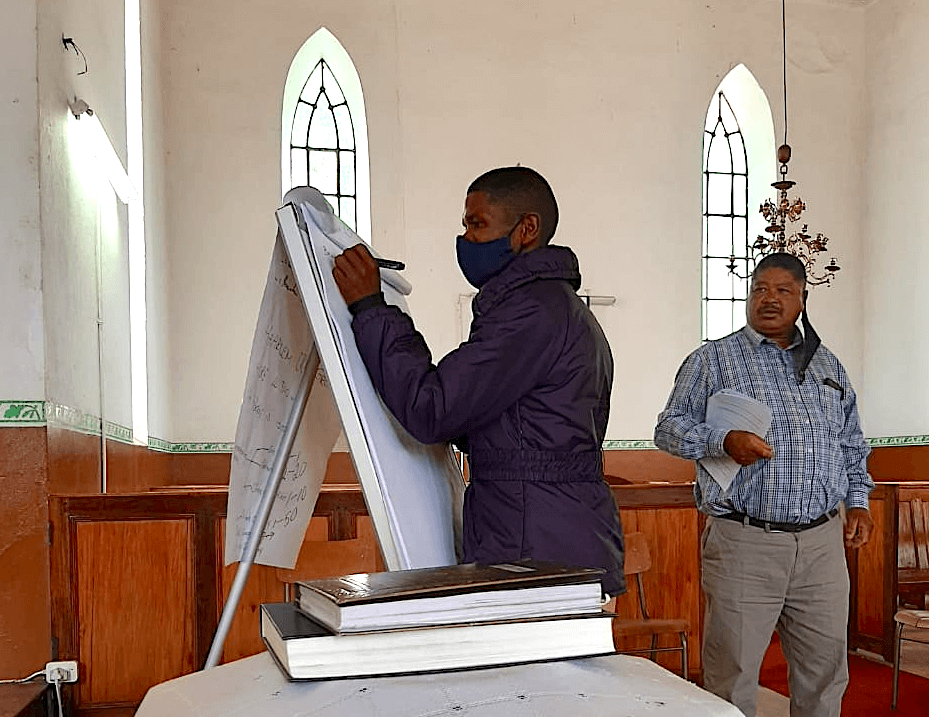 Our teacher, Mr Willem October, officially opened the first day on this incredible journey. In this part of the world is is not surprising that an introduction to anything in life starts with a reflection from the Bible. Mr October cited and read a reference from the book of Hebrews 12:2-3. This was followed by one of the students’, Elvinia Claasen, prayer.

During the first class, students were alerted to the need for understanding elements in the questionnaire that would be used as part of the research module targeting small-scale- and commercial farmers in the region. Mr October explained that understanding is important if students were going to learn the most from the research project. He explained that it was not simply a matter of asking a set of questions. A full comprehension of the terms and their meanings is vital to real learning. Students’ high interaction levels showed spontaneity, vibrance and a responsive set of replies during the sessions.

This part of the program will continue for five months, where at different times, students will also be sensitised to specifically think of their own entrepreneurship ambitions and to improve their knowledge of business development plans, business management in order to be ready to start a fully accredited qualification in New Venture Creation later this year.

Students learn the basics of plantlets and indoor farming

Author ANPAdminPosted on May 1, 2020August 12, 2020
It was just over a month ago when South Africa was sent into a lockdown on Friday 27th March 2020. After some deliberations, students...
Read More

Author ANPAdminPosted on December 29, 2020December 30, 2020
Tania Phillips and Gurshwin Damons came into the Learning Academy Worldwide orbit on 25th October 2019. They shone as bright lines in that orbit...
Read More

Official Opening of Agriculture Training Centre Inspires Song of Thanks

Author ANPAdminPosted on July 3, 2021January 3, 2022
The opening of the centre of excellence in Haarlem in South Africa last month brought unbridled joys through singing that echoed over this rural...
Read More

Donor Support Reporting Training
Author ANPAdminPosted on July 2, 2022July 4, 2022
DONATE NOW – MAKE A DIFFERENCE ‘Today I am putting out a challenge to those who know about and are interested in the...
Read More

Reporting Rural Gems Training
Author ANPAdminPosted on June 16, 2022June 21, 2022
Our students experience an earning and learning environment as they participate in the Plant Production module of their training in the Southern Cape  in...
Read More

Reporting Training
Author ANPAdminPosted on February 23, 2022May 1, 2022
The continued learning experiences for the AgrAcademy students include community-based opportunities that bring the theory of learning Plant Production into a practical reality. The...
Read More